Women’s Leadership in the 1890s

Enrollment at Purdue climbed in the 1890s as students from across the country—and from Canada, Japan, and Spain—came to study in West Lafayette. Eulora Miller paved the way as the first female student to graduate from Purdue in 1878, and at universities across the country, women began attending classes and participating in extracurricular clubs and activities. Though Purdue’s 1890 enrollment of 530 students included a number of women, classes and organizations were still separated by a seldom-tread gender line. At the time, women were not valued for their academic or athletic skills, but rather by their usefulness in domestic spaces and attractive qualities. One entry in a Debris yearbook described “the Purdue Girl” as “a novel creature … She invariably possesses beauty, so much, in fact, that no one troubles himself to inquire how she gets it or how much it costs to get it.” [1]

Male students and professors were often found in the engineering and chemistry laboratories, while the female students studied literature and elocution, yet women created their own opportunities for themselves at Purdue. By the beginning of the decade, Purdue had employed 7 female faculty, instructors, and assistants. Elizabeth Day Swan was the head librarian until 1903. Women joined intramural sports teams (such as tennis and ice skating), and held events for the Philalethean Literary Society—an all-female society. The following items offer a look into the ways women created opportunities and leadership roles for themselves on campus in the 1890s. 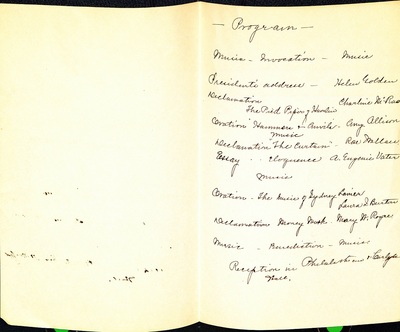 This hand-written program, which appears to be a draft, details the order of events for the Philalethean Literary Society’s open meeting in March, 1890. Open meetings, held at least once each term, provided members with the exciting opportunity to flaunt their rhetorical skills and perform feats of memorization, literary criticism, and elocution in front of a wide campus audience. According to the program, at the time of the 1890 open meeting, the Philalethean Society shared their reception hall with the Carlyle Society, one of Purdue’s all-male literary societies [3]. 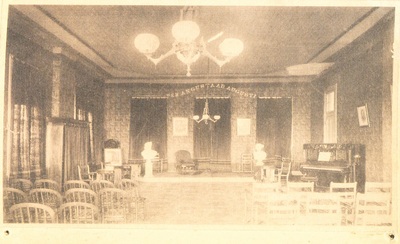 This photograph shows Philalethean Hall, located in Ladies Hall (built in 1871 to serve as a women’s dormitory). Though undated, the photograph would have been taken sometime before the demolition of Ladies Hall in 1927. In the photograph, Philalethean Hall appears to be set up for an open meeting or public event. A banner with the society’s motto, “Per angusta ad augusta” (Latin for “Through difficulties to honors”) can be seen hanging from the ceiling. A piano has also been set up in the far right; each open meeting would begin with a musical invocation, there would be a musical interlude to break up the orations and declamations, and the meeting would end with a musical benediction. The society’s emblem was Minerva; perhaps one of the busts at the front of the room is of the Roman goddess of wisdom and battle.

Debris Board of Editors photograph 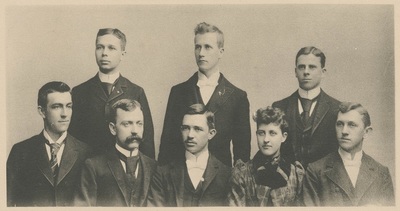 Debris Board of Editors photograph

Only one staff member was a woman: Agnes Eugenie Vater. In addition to serving as an Associate Editor for the Debris, Eugenie (as she is referred to frequently in other campus publications) was also involved with the Philalethean Society (she can be found in the March, 1890, open meeting program listed as giving an essay on eloquence), and served as the very first Editor-in-Chief of The Purdue Exponent (the university’s student newspaper), the first edition of which was printed in December 1889. After Eugenie’s tenure as Editor-in-Chief of The Exponent, she also worked as the literary editor of the paper’s Philalethean Society section. In its earliest days, the Exponent functioned more as a literary magazine than a traditional journalistic publication—it published poems, stories, speeches given on campus, and fragments of advice addressed to readers. Staff was also sure to comment on campus, local, and national goings-on: popular segments included faculty profiles, lists of new sports and chapel hymns, articles on prize-winning exhibits at the World’s Fair, and notes on other colleges in the Midwest and on the East Coast.

Eugenie’s older brother, Williamson Dunn Vater, also served as an Associate Editor for the Debris; he is seated to her right. The Debris did not specify the seating order for the complete Board of Editors.

Maddie Gehling is a first-year Master’s student in the Purdue English Department’s Literature, Theory, and Cultural Studies program. She graduated from Bradley University in Peoria, IL, in 2018 with degrees in English and journalism. Maddie is interested in 19th Century British literature, journalism, and women’s and gender studies—which, after learning about Eugenie Vater's tenure as the Editor-in-Chief of the The Purdue Exponent, led her to research women’s history and leadership at Purdue.

[2]  Michael Mendelson, “Declamation, Context, and Controversiality,” Rhetoric Review 13, no. 1 (Autumn 1994): 92. A declamation is the recapitulation, recreation of, or response to the arguments set forth in a different speaker’s original oration. This Roman rhetorical tradition has been a popular oratory event for centuries and is still performed at forensics events today.