International Students in the 1900s

The Cosmopolitan Club was organized in the Fall of 1907 at Purdue University. It focused on bringing together students from around the world to have a better understanding among each other. First year members were from the United States, Argentina, Australia, Bermuda, China, France, Germany, Mexico, Philippines, Puerto Rico, and Spain. By 1938 the club’s motto was “above all Nations is Humanity.” In 1945 the club was replaced by the International Association of Purdue University with a revised constitution [1]. 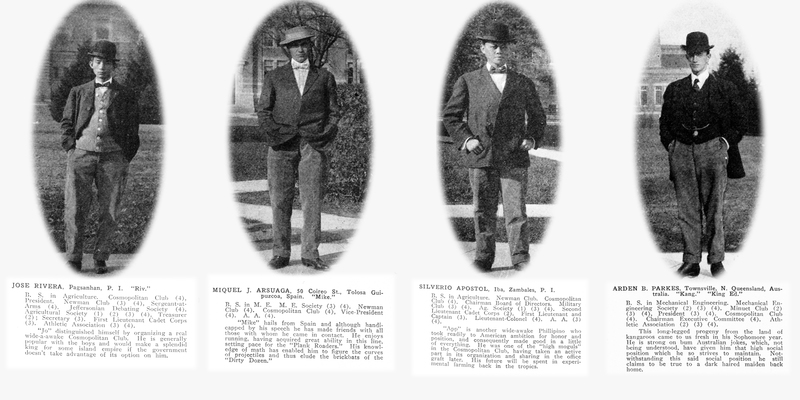 The 1908 Debris includes a club portrait and short biographies of the graduating seniors. I created a montage portrait of the 1908 Cosmopolitan Club President, Vice-President, Board of Directors Chairman, and Executive Committee Chairman. All were graduating seniors in 1908. I used Adobe Photoshop to composite image and description layers into one file.

Group portrait and description of The Cosmopolitan Club, Purdue Chapter, 1907 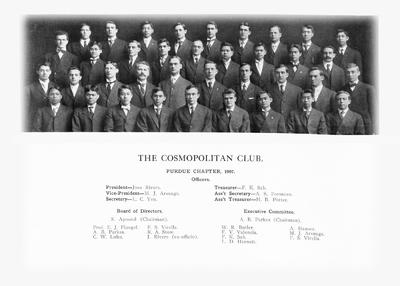 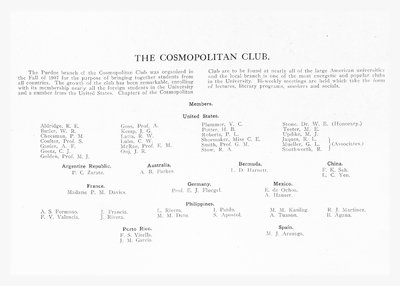 Description and members list of The Cosmopolitan Club, Purdue Chapter, 1907

"The Purdue branch of the Cosmopolitan Club was organized in the Fall of 1907 for the purpose of bringing together students from all countries. The growth of the club has been remarkable,  enrolling in its membership nearly all the foreign students in the University and a number from the United States. Chapters of the Cosmopolitan Club are to be found at nearly all of the large American universities and the local branch is one of the most energetic and popular clubs in the University.  Bi-weekly meetings are held which take the form of lectures, literary programs, smokers and socials" [2].

Saad Mukhtar is a first-year doctoral fellow in the School of Interdisciplinary Studies. He graduated with a BA in Film/Video studies from Purdue University in 2018, and with a BS in Business Administration from Drexel University. Saad’s area of research interests include archival science, ethnography, and semiotics.