Foreign Teaching Assistants in the 1980s

Since Purdue University admitted its “first student from outside the United States,” Mrs. Amelia Weir from Ottawa, Ontario, in 1887[1], the university has recorded the number of such students each year in the course catalogue. This number has on the whole has consistently increased since 1887, a trend that Purdue has been proud of. For instance, tn 1925 Howard Milton Baldwin, “Adviser of Students from Other Lands,” proclaimed that Purdue had ascended to the status of “world teacher” [2]. Purdue was happy with this self-appointed role, claiming through various outlets such as The Purdue Exponent, the Debris yearbook, and course catalouges that "foreign" students [3] grew intellectually by learning not only technology but also English. As time passed, however, Purdue became increasingly concerned about the English proficiency of its foreign students, especially after these students started teaching as teaching assistants. The discussion over foreign teaching assistants’ English proficiency—or, accents—became especially heated during the 1980s.

An article titled “Imported Students” and published through The Purdue Exponent on November 16, 1916, states that Purdue did not yet have “as large a share as she would like” of foreign students. The article considers this a problem because educating more foreign students “[went] a great way toward cementing a good feeling between the United States and the other countries across the sea.”

This article also mentions English as one of the reasons “foreigners come to America.” 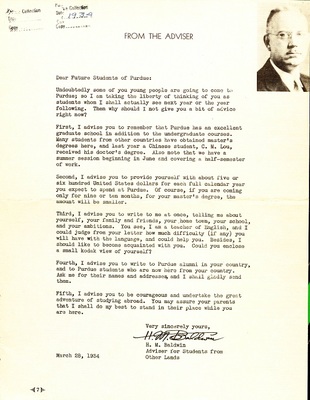 A letter to prospective foreign students by Howard Milton Baldwin

In a letter dated March 28, 1934, Howard Milton Baldwin, the “Adviser of Students from Other Lands” at the time, asks prospective foreign students to write to him, so that he could judge their English proficiency.

Baldwin served as “Adviser of Students from Other Lands” until his death in 1941. He also taught the “English for Foreign Students” course, which was first taught in the academic year of 1926-1927 [4]. As stated in the course catalogues that contain this course, all foreign students, both undergraduates and graduates, were required to take the course, unless excused by Baldwin.

The Purdue Exponent published a comic strip drawn by Bob Peterson in February 5, 1985, that showed a professor telling a student that he will post the teaching assistant’s office hours “as soon as we teach him English.” The teaching assistant is named “Mohammed Jose Chang,” a name made up of various ethnic names.

This comic was criticized by a letter written by graduate students Y. Meir Mah, Essam Fattouh, Margaret Jones, and Rachel Gillet [5]. Published by the Exponent on February 12, 1985, this letter criticized Peterson’s comic for being “wholly lacking in tact toward those minorities [the Exponent claims] to champion,” and asked for the Exponent to apologize to the foreign graduate student community for “the slur on their capabilities.” The Exponent did not publish an apology.

On November 4, 1986, The Purdue Exponent published an opinion article by Sandar Sarukkai, a graduate student [6]. This article was titled “TA’s accents irremoveable[sic],” and in it Sarukkai problematizes the “newly introduced plan to convert the deeply-rooted accents of the foreign TAs in one semester or two,” claiming that the University administration was “highly pretentious” to suggest it [7].

Jeff Michalak’s article, titled "Writer to TA's[sic]: truth hurts" and published by the Exponent on November 12, 1986, was a direct response to Sarukkai’s [8]. In this article Michalak calls Sarukkai as “Sundar Sarwhatever,” and claimed he seemed “a little miffed” about the “general attitude toward foreign TAs.” Michalak also claimed that the “Hoosiers,” like foreign teaching assistants, “painfully mutilate the English language.”

Michalak’s article was followed up by several angry student responses, which were also published through the Exponent [9]. Michalak published his reponse to these criticisms against him in the December 5, 1986 issue of the Exponent [10]. In this article Michalak tells what he calls “the I Hate Mr. Michwhatever Fan Club” that he did not mean to judge or “belittle” anyone’s lifestyle—he only meant to discuss the “interpretation of certain accents.” 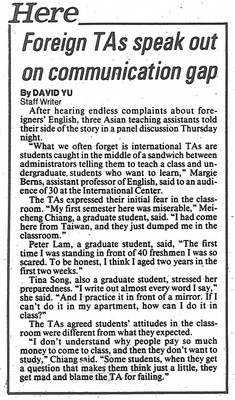 Article about foreign teaching assistants' opinions on the "communication gap"

An article published by a staff writer through The Purdue Exponent on February 24, 1989, introduces three Asian teaching assistants’ responses to the complaints about “foreigners’ English” [12]. Compared to undergraduate students, the actual foreign teaching assistants voices were not often published in the Exponent.

Narim Kim is a Phd student in the Purdue English Department’s Literature, Theory and Cultural Studies Program. As she is from South Korea, she would also be classified as an international student.

[3] Although technically different terms, I use “foreign student” and “international student” interchangeably for convenience; It is beyond the scope of my research to distinguish these terms.

[7] This “newly introduced plan” refers to the plan that was outlined in “University Senate Document 85-10, Foreign Teaching Assistants.” This document was discussed in the 8th meeting of the 1985-1986 Purdue University Senate. The records of the senate meeting explain that the document “recommends that the President give high priority to the creation of a University-wide program for the preparation for teaching of foreign T.A.’s[sic] including the creation of a central resource center for the testing and training of T.A.’s[sic]” (3). The records note that “a number of senators expressed strong reservations to the proposal” (3). The records also stated that the Educational Policy Committee was considering the “English as a Second Language” proposal as well because of these expressed reservations (“Eighth meeting of the 1985-1986 Purdue University Senate,” Purdue University Faculty and Senate Records, April 28, 1986. p. 3.). Based on this plan a “bill for a program aimed at improving the quality of foreign teaching assistants” was crafted and was voted for unanimously on October 27, 1986 (Kusek, Dawn. “University Senate passes bill for plans seeking to improve foreign TA quality,” The Purdue Exponent (West Lafayette, IN), October 28, 1986.).